Chinampa is an agricultural technique used by the farmers of Mexico where crops are grown in a shallow lake bed. The term may also refer to an artificial island or a narrow garden bed separated by a canal built on a lake, to grow crops. It is also called a floating garden as it gives the impression that it is suspended on water. This Vacayholics post gives you some interesting facts about chinampas. 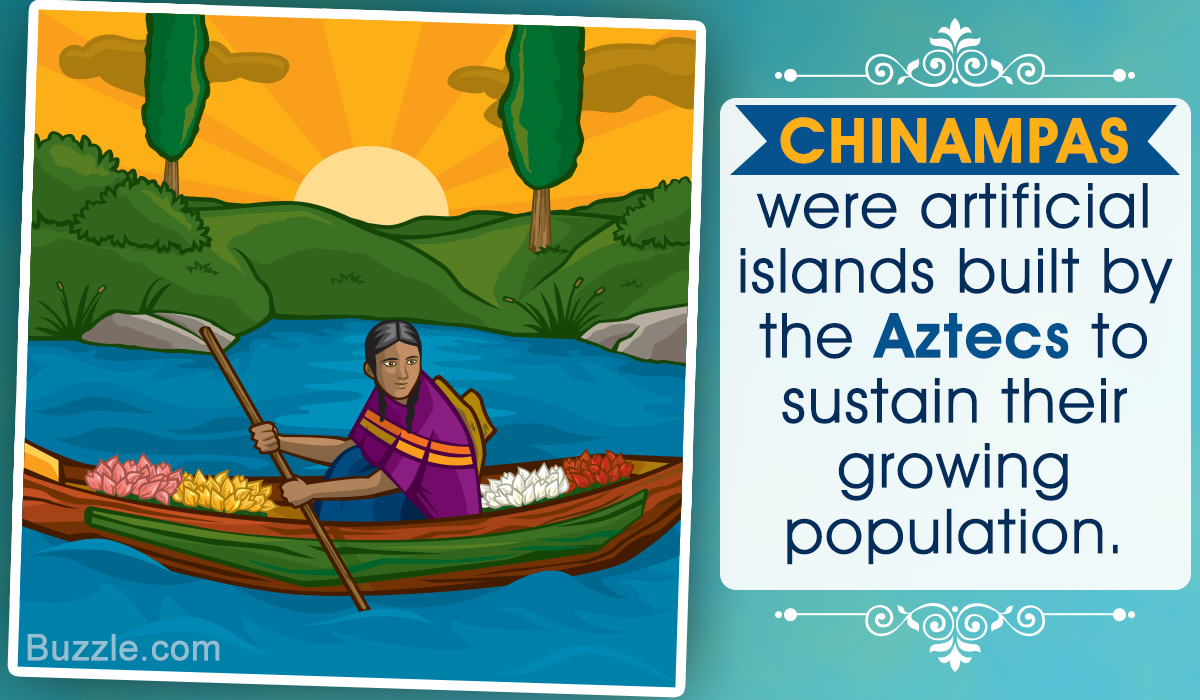 Chinampa is an agricultural technique used by the farmers of Mexico where crops are grown in a shallow lake bed. The term may also refer to an artificial island or a narrow garden bed separated by a canal built on a lake, to grow crops. It is also called a floating garden as it gives the impression that it is suspended on water. This Vacayholics post gives you some interesting facts about chinampas.

The word chinampa is derived from the Nahuatl word chinamitl meaning hedge or fence surrounding a square plot of land with water on at least three sides.

Farming has been an occupation of small-scale farmers in Mexico. Multi-species culture or polyculture has been popular. Chinampa was a farming technique or polyculture system, which used narrow rectangular cultivable areas for agricultural purposes. The rectangular regions were built on beds on the swamplands of lakes Xochimilco, Chalco, and Texcoco in the Valley of Mexico and were surrounded by canals. The beds were built by stacking layers of mud and decaying vegetation. This farming system was taken up in order to sustain their large population, and to minimize the problem of land shortage. It was the most important innovation made by the civilization.

The chinampa system of agriculture was invented by the people of Xochimilco. Eventually, they were conquered by the Aztecs, Nahuatl-speaking people, who made use of and continued building more agricultural lands with the chinampa system. Thus, this method grew and extended to more than 20,000 acres of swamplands and provided food for the people. Various types of chinampas are mentioned in the historical documents of Mexico. The most popular one, usually portrayed in paintings, books, and other things of Mexico was an artificial land surrounded by willow trees.

Interesting Facts about the Chinampas

✦ The artificial fields, chinampas were narrow and rectangular raised platforms, about 5 to 10 meters wide and 20 to 40 meters long confined on all sides by canals, about 1 meter above the water level.

Stakes or rafts were posted to the bottom of the lake or marshland as a boundary for the land. In between the stakes, vines and branches were interwoven. For creating an arable bed, the enclosed area would then be filled in with mud scraped from the lake or swamps, dirt and thick mats of decaying vegetation from the lake bottoms or in marshes, until it rose to about one meter above the level of water.

✦ The sides of the raised land were filled with branches and willow trees to provide further stability as well as shade. The dense roots of the trees anchored to the walls of the structure and thus, soil erosion was minimized.

✦ The trees would be carefully trimmed and placed so that they allowed sufficient sunlight to enter the farm plot for the crops to grow well and survive.

✦ Another farming plot would be made parallel to this one with canals built in between. These canals were built to provide irrigation, allow boats to travel and navigate between the lands, provide food like fish, salamanders, frogs, turtles, and aquatic birds, to prevent the lands from pests and livestock, and to allow transportation so that resources could be brought into the Aztec empire.

✦ Soil fertility was maintained by adding decaying vegetation, organic-rich silt by digging up from the bottom of the canals, and animal and even human manure would be added to the fields. In this way, the crops would remain good and wastewater would also be treated, thereby creating a healthier living environment for everyone. Seeds were planted in specially prepared seedbeds by farmers and the seedlings were later planted on the fields.

✦ This agricultural technique helped overcome the difficulties in farming such as variable rainfall, frosts, and soil fertility in the Basin of Mexico. The contact of land with the surrounding water provided sufficient soil moisture for the crops. Also, water was readily available by irrigation through canals. The water also regulated the nighttime temperature and helped to mitigate frosts.

✦ The farmlands were used by the Aztecs to grow a variety of crops such as maize, beans, squash, tomatoes, chilies, peppers, leafy vegetables, pumpkins, okra, onions, edible herbs and a variety of other crops. The gardens were also used to grow various flowers which would make the land even more lush and splendid. Fruit trees like the Mexican cherry, Mexican hawthorn, and prickly pear were grown.

✦ Crops were transported to the market by boats traveling through canals and lakes surrounding the chinampas.

✦ The agricultural lands were tended by the workers in Mexico. Some were laborers and slaves while others were agriculturists, who determined which seeds would be best for growing, what plants to grow on which plots for optimal outcome and other aspects, and planned the crop rotation cycle.

✦ The residents surrounding the Lakes Xochimilco, Chalco, and Texcoco depended on the crops on chinampas. The lands would produce about seven crops a year. About two-thirds of the food from the chinampas would be consumed by the people in Tenochtitlan.

Though urban expansion has led to ecological deterioration in Mexico, the chinampa agricultural system still uses efficient farming techniques to maintain a good productivity of crops. It generates high income and employment for people in Mexico. Today, functional chinampas can be seen in the Xochimilco area.