Interesting Facts About the Bay of Fundy That are Simply Incredible

The Bay of Fundy, located between Nova Scotia and New Brunswick, Canada, is famous for its incredibly high tides and spectacular geological formations like the Flowerpot Rocks and sea caves. Find out some interesting facts about the Bay of Fundy, in this Vacayholics post. 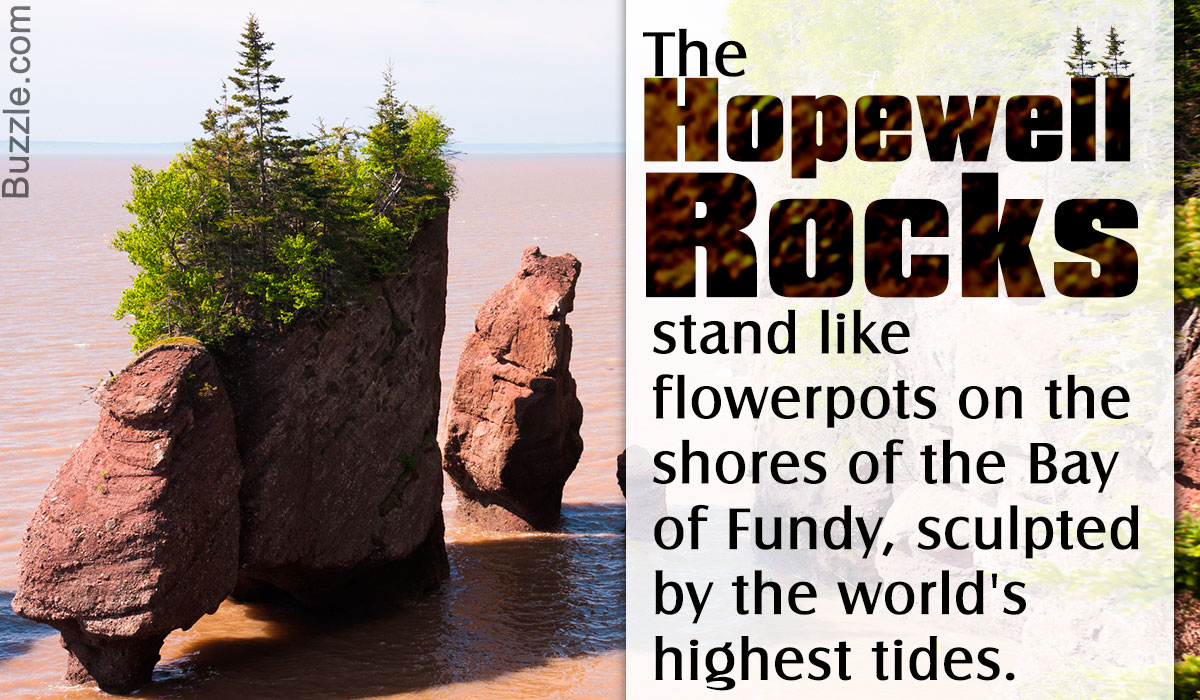 The Bay of Fundy, located between Nova Scotia and New Brunswick, Canada, is famous for its incredibly high tides and spectacular geological formations like the Flowerpot Rocks and sea caves. Find out some interesting facts about the Bay of Fundy, in this Vacayholics post.

The amount of water that flows in and out of the Bay of Fundy during one tide cycle, is more than the combined flow of the world’s freshwater rivers!

Located on the Atlantic coast of North America, on the northeast end of the Gulf of Maine, the Bay of Fundy is a wonder of Mother Nature. It lies in a rift valley known as the Fundy Basin, between the Canadian provinces of New Brunswick and Nova Scotia.

According to some sources, the word ‘Fundy’ is derived from the French word, ‘Fendu’, which means split. However, there are others who believe that it comes from ‘fondo’, the Portuguese word for funnel. No matter what the origin is, it is a place of endless adventure for tourists, where they can marvel at the breathtaking coastline, swept by the world’s highest tides.

The shape of the bay can be compared to a big funnel, which gradually tapers and becomes shallower at its upper end. It is estimated that approximately 100 billion tons of water flow in and out of the bay in one tide cycle, i.e. in every 12 hours and 26 minutes.

How was the Bay of Fundy Formed? 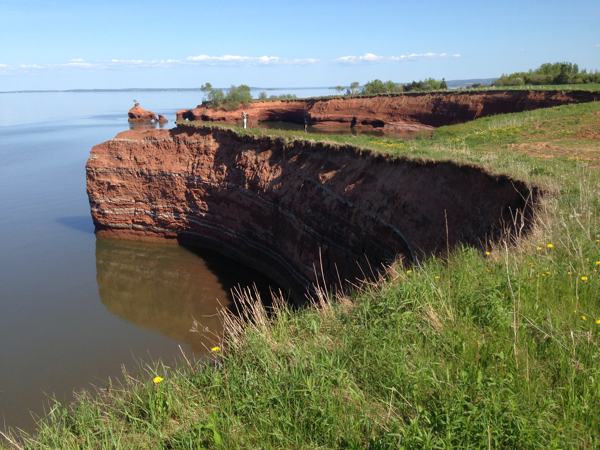 The 270 km long funnel-shaped Fundy Bay was formed due to continental drift.

The Bay of Fundy was formed as a result of continental drift, which caused the Earth’s continents to part, leading to the formation of deep rift valleys, millions of years ago. These valleys were then filled by sediments from the surrounding mountains, leading to the formation of sedimentary basins, like the Fundy Basin. This funnel-shaped bay splits into Chignecto Bay in the northeast and the Minas Basin in the east.

» During springtime, tides as high as 16 meters or 53 feet can be seen in the Bay of Fundy, which creates a unique and breathtaking view. The highest tides in the world occur in the Minas Basin, Nova Scotia.

» Visitors can expect to see two high and low tides in every 24 hours; the time between a high and a low tide being six hours and 13 minutes, on an average.

» The uniqueness of the Fundy tides can be attributed to three factors, the shape and size of the bay, the substantial amount of water that flows in and out of the bay, and the gravitational pull of the moon, which pulls the water towards itself, causing a bulge on the ocean surface. 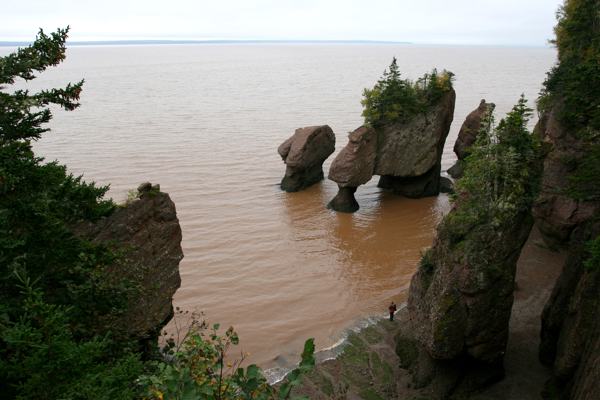 The Bay of Fundy is famous for its highest tidal range. The shape of the cliffs, sea stacks, mudflats, and the caves; all reflect the impact of the tides.

» Due to the shape of the bay, the body of water gradually narrows and becomes shallower. Due to this constriction, a tide entering the bay rises up.

» Tidal bore, another interesting geologic feature of the Bay of Fundy, occurs mainly in the rivers of the upper bay. It is also caused by the Fundy tides, which are so strong that they temporarily reverse the flow of several rivers. This causes the wavefront or crest of water to travel its way up the river, against its normal flow, resulting in a tidal bore. 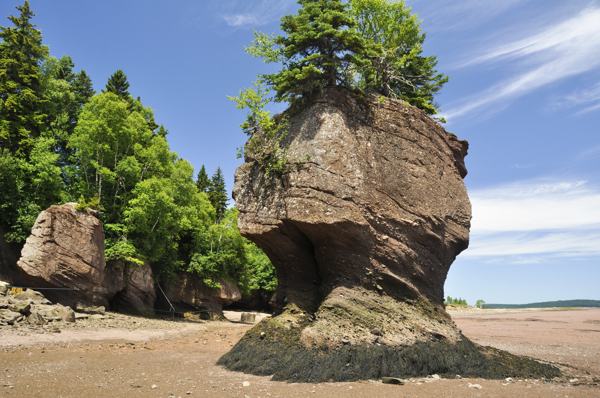 The Hopewell Rocks are famous for their unusual shape, which earned them the nickname, ‘Flowerpot Rocks’.

Flowerpot Rocks are one of the many geological marvels of the Bay of Fundy. Located on the shores of the bay, these rocks are the result of continuous erosion, caused by the strong tides. The advancing and retreating tides have caused the bases of the rocks to erode rapidly than their tops, resulting in their unusual shapes. Topped by evergreen trees, these rocks stand like huge sculpted ‘flowerpots’, which can be viewed from the ground level at low tide.

» The famous red mudflats are the result of the high tides of the Bay of Fundy. These mudflats can be mostly seen in the upper region of the bay, along with expansive salt marshes.

» They are formed due to the accumulation of sediments in the coastal area. These mudflats provide essential habitat and food resources for the hungry migratory birds, that stop in the bay while migrating from their spring breeding grounds to their wintering grounds.

» The main food of these migratory birds are crustaceans, Corophium volutator, also known as mud shrimp, which thrive only in mud of a certain consistency, found in the Bay of Fundy and the Gulf of Maine. 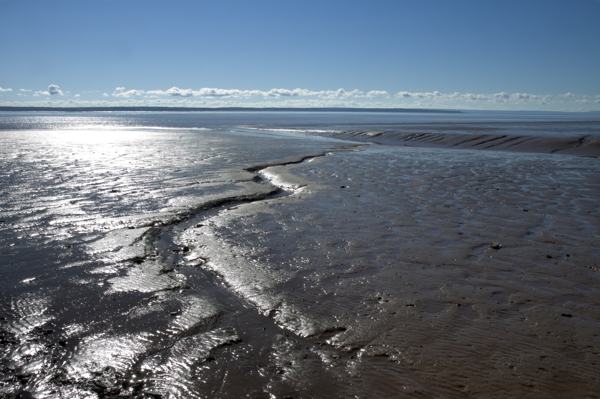 The mudflats of the Fundy Bay provide food to hungry migratory shorebirds.

» In the Bay of Fundy, phytoplankton production is quite low in the water, as the tides continuously stir the water and make it muddy. Due to this, sunlight cannot reach deep into the water, making it impossible for phytoplanktons to photosynthesize.

» Phytoplankton growth is quite high in the mudflats, which are rich in nutrients, left behind by the ebbing tides.

» The strong tides of the bay not only nourish the mudflats, but also carry nutrients to the rest of the Gulf of Maine and the Grand Manan Island, an island in the midwestern end of the Bay of Fundy.

» The phytoplanktons and fish in the nutrient-rich water around the Grand Manan Island attract several species of whales, which come there for feeding and courting. 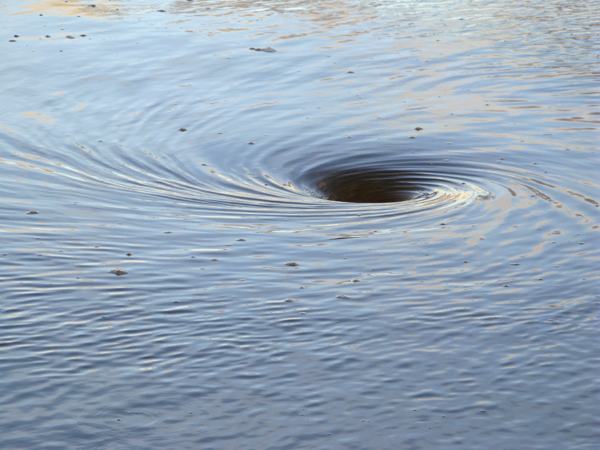 The Old Sow Whirlpool is the largest whirlpool in the Western Hemisphere.

In addition to the high tides, the Fundy Bay is also home to several other spectacular phenomena, its whirlpools being one of them. The most famous whirlpool of the bay is the Old Sow Whirlpool, which is the largest whirlpool in the Western Hemisphere. It is a tidal whirlpool in the Passamaquoddy Bay, caused by the tidal currents that come into the bay and fuse with the countercurrents from the St. Croix River, located to the north of the bay. You can see this whirlpool from the shores of Eastport, Maine. The best time to see this whirlpool is about 3 hours before a high tide, as it is most active during this period. 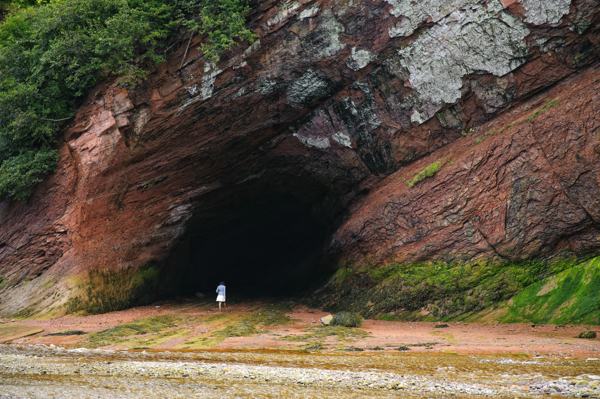 St. Martins Sea Caves are formed due to erosion caused by the powerful tides
of the Bay of Fundy.

These are sandstone caves, or crevasses that are carved by the tides crashing against the rocks, causing them to erode and eventually form deep fissures. Visitors can explore these caves at low tide, which can be an exhilarating experience. These caves are located in the quaint village of St. Martins.

» The Bay of Fundy has earned worldwide recognition for its diverse ecosystem and the exceptional pyramid of marine food chain. Many people compare it with the Great Barrier Reef of Australia and the Rain Forest of Brazil.

» The nutrient-rich water is home to enormous amounts of krill, squid, and fish like, herring, mackerel, and pollock, which attract several species of whales, including the endangered Northern Right Whale.

Whales and dolphins form a part of the bay’s amazing marine life.

» The other species of whales that come to the bay are, finback whales, humpback whales, minke whales, baleen whales, killer whales, blue whales, and Sei whales.

» In addition, crabs, lobsters, sea urchins, and a large number of fish, such as salmon, halibut, cod, tuna, shad, haddock, etc. are also drawn to the bay, mainly due to the sheer abundance of krill, algae, and planktons, which are at the bottom of the food chain.

With spectacular rock and sandstone cliffs, picturesque lighthouses, and exotic marine life, the Bay of Fundy is full of surprises at every step. Right from whale watching, to kayaking, hiking, surfing, and tidal bore rafting, this place can be a thrilling experience for any visitor. So, the next time you plan your vacations, consider the Bay of Fundy to enjoy the wonderful diverse world out there.