Interesting Facts About the Catacombs of Paris

An extensive network of tunnels run unnoticed under the city of light and love, some parts of which are lined to the ceilings with human skulls and bones. What exactly are the Catacombs of Paris, and what is their purpose? Let's find out...

Home / Uncategorized / Interesting Facts About the Catacombs of Paris 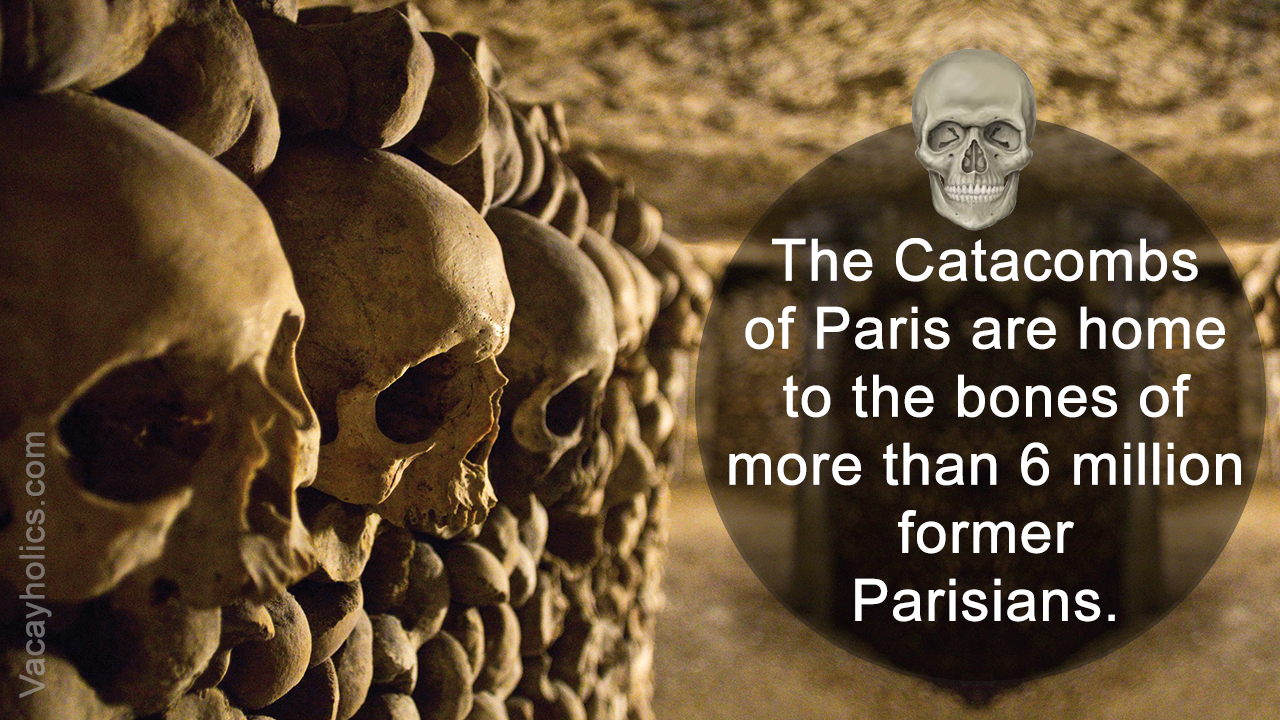 An extensive network of tunnels run unnoticed under the city of light and love, some parts of which are lined to the ceilings with human skulls and bones. What exactly are the Catacombs of Paris, and what is their purpose? Let’s find out… 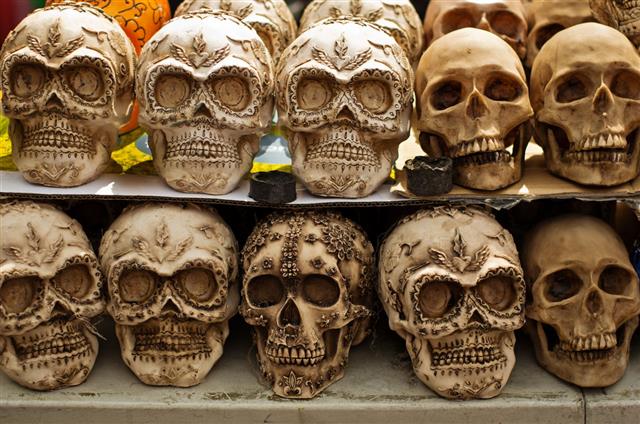 Originally, the word ‘catacomb’ referred to a specific set of underground tombs in Rome, under the Basilica of Saint Sebastian, where the apostles Peter and Paul were believed to have been laid to rest. However, by 1705, the word started being used in connection with other underground cemeteries, a practice which has continued till today.

Millions of people travel from all around the world to visit Paris each year. The city has some of the most iconic landmarks and tourist spots, providing some of the best sights, sounds, and food in the world. However, while Paris is a bustling metropolis on the surface, It holds a dark secret in its bosom. A second lesser-known subterranean city of the dead exists: The Paris Catacombs.

Visitors to the catacombs are first greeted with a sign at the entrance of the ossuary, which reads ‘Stop. This is the empire of death.’ A charming introduction to the secret world of long winding tunnels, stretching for miles under Paris, packed with innumerable neatly stacked bones, most of which were excavated from various cemeteries in the 18th century. This morbid place is considered to be the world’s largest graveyard, a claim which brings in intrigued tourists by the thousands, each year. However, why was such a place created in the first place? To find out, we need to take a closer look at the history and some interesting facts about the Catacombs of Paris.

Why Were the Catacombs of Paris Built?

In the 17th century, Paris was at the peak of its growth as a major European hub. However, the people were quite suddenly faced with a large problem: The cemeteries of the city had no more place left to house the dead. In fact, the graves in these areas were overflowing with dead bodies, so badly that corpses could often be seen popping out of the ground. This created a situation where the citizens of the city had to not only endure the terrible stench, but were also at risk to major health problems.

To counter this, Louis XV issued a law in 1763, that no more bodies were to be buried within the capital. However, because the Church did not want any of the cemeteries to be moved, nothing else was done to solve the problem of the bodies already existing in the city. The campaign to move the cemeteries out of Paris was continued by Louis XVs successor Louis XVI, but even he met with a lot of resistance. However, in 1780, the problem reached its peak, when after a prolonged period of rain, a wall of Les Innocents (the largest cemetery in Paris) collapsed, spilling rotting corpses into the neighboring areas. Finally, a decision was taken to excavate the bodies from all around the city and relocate them to some other place.

In the 13th century, several quarries of gypsum and limestone were mined under the city to build Paris into thriving center of commerce. Centuries later, these old tunnels were now chosen to house the remains of over 6 million Parisians. A major project was undertaken to accomplish this task. It took a total of 12 years to move all the bones and bodies, some of which dated back to the Merovingian Era over 1,000 years ago. From the beginning of the French Revolution in 1789, people who died were directly interred into these subterranean ossuaries. This practice of burying bones in the catacombs only stopped in 1860.

After this, certain parts of the tunnels were used for other purposes. For e.g., people from the noble families held underground picnics and parties. Some walls of the catacombs are covered in graffiti dating back to the 18th century. It is also a known fact that, in the 19th century, several people lived within the catacombs. In fact, a group of communards killed some monarchists in one of the chambers in 1871. The tunnels were also used by the Nazis and the French resistance at different times during the Second World War.

Features of the Catacombs

Welcome to the City of the Dead

Entrance of the Catacombs

Passages in the Catacombs

Old Quarry Area of the Catacombs

A Cross in an Alcove of the Paris Catacombs

A Grave Marker for the Dead 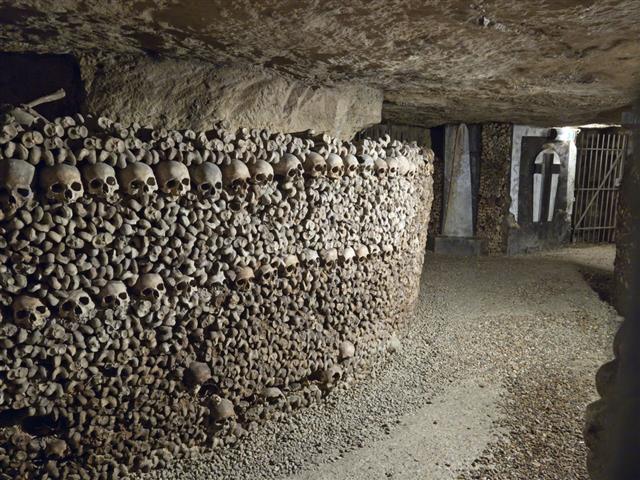 Stacks of Skulls and Bones

Illegal Party in the Catacombs

The Catacombs of Paris are hundreds of miles long. However, only around one mile of this area is open for public exploration. The rest is deemed to be unsafe, and hence, is illegal to visit. Once inside the ossuary, one can see impressive structures of bones, which are neatly grouped in stacks or other creative patterns according to the cemeteries that they came from. In some areas, people can also see creepy sculptures created by a veteran of Louis XVs army, before the bodies were moved in. It is a really creepy/cool experience, depending on the visitor’s views.

Catacomb Passage in the Restricted Area

Several secret entrances to the tunnels are scattered across the city. Many manholes also have access points into the catacombs. However, visiting these areas without official permission is illegal since November 2, 1955. There is a special police force assigned to prevent trespassing into the tunnels, and if caught, a person can face large fines. Despite this, there is a pretty active subculture of ‘cataphiles’ (illicit explorers) who know a lot about the tunnel system, often holding invite-only parties and concerts, which one can find only if they know the way around. It is rumored that, one can find entire fully-furnished squatter villages, artifacts from a number of wars, and much more there. In fact, the tunnel police recently found a fully functional movie theater in this area.

Are the Catacombs of Paris Haunted?

With the number of skeletal remains in the catacombs, it is one of the top contenders for being the most haunted place in the city. If one surfs the net looking for videos of people catching images of spirits on tape, the results can be quite convincing. On the other hand, many paranormal investigators disagree about such hauntings, saying that, since no one has died within the catacombs, the chances of a haunting here are extremely slim.

So, the next time you are in Paris, make sure to check out this place. You won’t regret it. Only make sure that there are no skeletons following you when you leave, and you’ll be fine.