The name Disney undoubtedly brings in front of our eyes visions of a dreamy and fantastic world that makes all kids overjoyed. So for all those tiny li'l Disney fans, Vacayholics lists out how many Disney Parks are there around the world and also a map of the locations.

Home / Uncategorized / List of Disney Parks Around the World 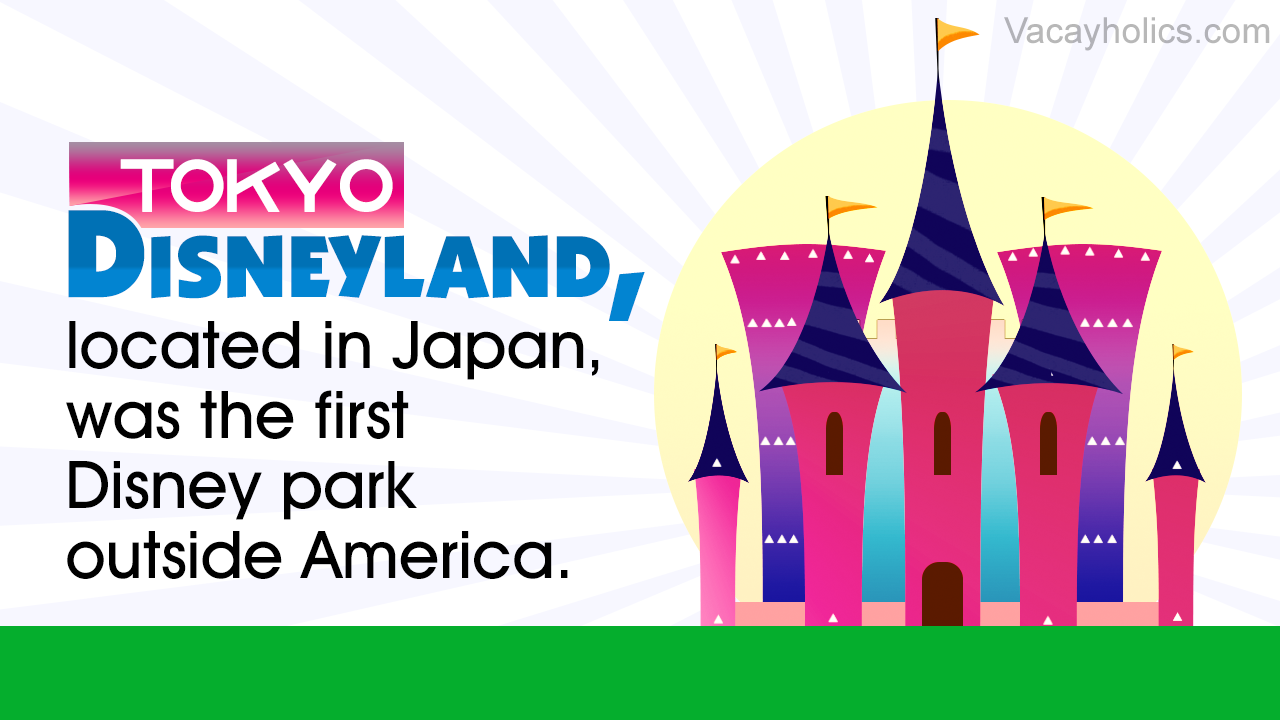 The name Disney undoubtedly brings in front of our eyes visions of a dreamy and fantastic world that makes all kids overjoyed. So for all those tiny li’l Disney fans, Vacayholics lists out how many Disney Parks are there around the world and also a map of the locations. 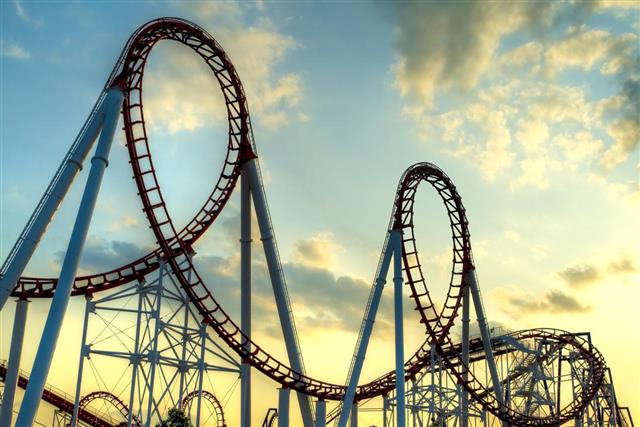 “Disneyland is dedicated to the ideals, the dreams, and the hard facts that have created America, with the hope that it will be a source of joy and inspiration to all the world.”   ― Walt Disney

Disney Parks, originally called Walt Disney Attractions, is one of the major business segments handled by The Walt Disney Company. These parks which are situated in many parts of the world are replete with fun and entertainment as they offer theme parks, water parks, and family-oriented leisures too.

Thus, it becomes an ideal vacation destination for the entire family. Disney Parks have hit the bull’s eye, rising in popularity ever since their inception. The year 2013 itself witnessed a huge crowd, with the parks welcoming 132.5 million guests.

Seeing its popularity, we decided to put up a list of Disney Parks around the world. 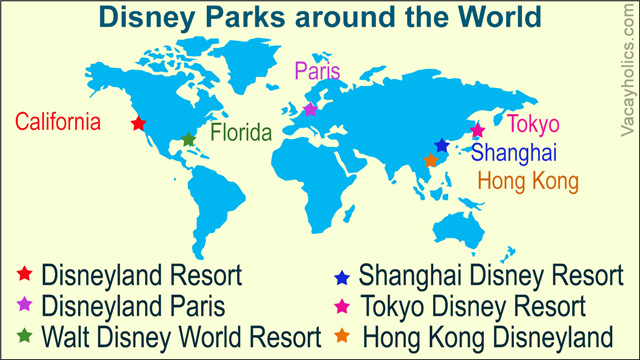 Disneyland Park is a part of the Disneyland Resort in Anaheim, California. It was opened on July 17, 1955, as Disneyland, but later changed its name to ‘Disneyland Park’. This is the only theme park that was blessed by Walt Disney’s presence. This park has the most number of visitors, which is 650 million guests since it opened. The whole park consists of different themed areas called “lands” like Main Street, U.S.A., Adventureland, New Orleans Square, Frontierland, Fantasyland, Mickey’s Toontown, Tomorrowland, and Critter Country (earlier, “Bear Country”). There is a new addition of the “Disney California Adventure Park”, where you can enjoy huge roller coasters. Space Mountain, The Haunted Mansion, A Bug’s Land are a few of the favorite rides and attractions.

The Walt Disney World Resort is built in the Lake Buena Vista of Florida. It was opened on October 1, 1971 by the Walt Disney Parks and Resorts. It has a total of 4 theme parks―Magic Kingdom, Epcot, Disney’s Hollywood Studios, and Disney’s Animal Kingdom. The Magic Kingdom of Florida was the first one to be opened and is built on a series or tunnels or corridors that are used by the costumed characters to move around the park without the guests noticing them, they are also used by ambulances in case of emergencies. Also, it has two water parks named Disney’s Typhoon Lagoon and Disney’s Blizzard Beach. There are various resorts, golf courses, and also beaches in the park. There are many rides inspired by the original Disneyland, but it also has some unique attractions like the Cinderella’s Castle―a replica of the fairy tale castle seen in the film.

Tokyo Disneyland is a theme park of the Tokyo Disney Resort, which was the first Disney park outside America. It was built by Walt Disney Imagineering, but it is currently owned by The Oriental Land Company. It opened for guests on April 15, 1983. It comprises almost the same themed areas like Adventureland, Westernland, Critter Country, Fantasyland, Mickey’s Toontown, Tomorrowland, and World Bazaar. It also has a counterpart, Tokyo DisneySea. DisneySea includes many exciting rides and interactions with Disney characters. The Captain EO, Mermaid Lagoon Theater, Michael Jackson music show, and Tower of Terror are a few of the major attractions. This park is famous for huge open spaces. Hence, it attracts a large number of guests and can accommodate them all.

Disneyland Paris was originally called “Euro Disney Resort”, and is owned by “Euro Disney S.C.A. It opened on April 12, 1992 and is the most visited park in France and Europe. It consists of two main theme parks―Disneyland Park and the Walt Disney Studios Park. Many theme names are similar to the theme names in Florida, but there are changes to the rides. Also, the Adventureland is called the Discoveryland. It’s a Small World, Space Mountain: Mission 2, Twilight Zone Tower of Terror, Pirates of the Caribbean, Big Thunder Mountain, and Buzz Lightyear Laser Blast are a few of the major attractions of the park.

It was the first theme park built in the Hong Kong Disneyland Resort and the other is Ocean Park Hong Kong. It officially opened on September 12, 2005. The park is owned by the Hong Kong International Theme Parks. The themed areas include Main Street, U.S.A., Fantasyland, Grizzly Gulch, Adventureland, Mystic Point, Toy Story Land, and Tomorrowland. It is the smallest of the Disney parks in the world and welcomes only 34,000 visitors daily. There are plans to construct new additions to the park in the coming years, like Flying with Iron Man (2016) and opening of a new hotel in 2017.

Shanghai Disneyland Park is an under-construction theme park resort at Pudong, Shanghai. It will be jointly owned by Shanghai Shendi Group and The Walt Disney Company. The construction began in 2011, and it is expected to open in 2016. The park is scheduled to feature many interesting and great experiences, and will also include a mixture of the traditional rides of other Disney parks.