Situated in the financial hub of India, is the country's most famous hotel―The Taj Mahal Palace Hotel. In this article, we'll read about its history, and learn several interesting facts that make this hotel globally noted.

Situated in the financial hub of India, is the country’s most famous hotel―The Taj Mahal Palace Hotel. In this article, we’ll read about its history, and learn several interesting facts that make this hotel globally noted.

This hotel has been a host to the Prince of Wales, King and Queen of Norway, Muhammad Ali Jinnah, Sarojini Naidu, Bill Clinton, Jacqueline Kennedy Onassis, and Jacques René Chirac. Artists such as Mick Jagger, The Beatles, and Elvis Presley have also stayed here.

Mr. Jamsetji Tata wanted to build a grand  hotel that would help in rebuilding Mumbai’s global image. Eight years later, the foundation of this hotel was laid. Staying true to his vision, Mr. Tata completed the construction in 1903, and opened the hotel to guests on 16th December, in the same year. This hotel is what you today know as the Taj Mahal Palace Hotel. After completion, it immediately became a favorite of the royals, with many princes opting to stay here, given the hotel’s luxurious comforts, which was then absent in the city. In later years, as we have already seen, many world leaders and royals called this hotel their home, even if it was just for a day. 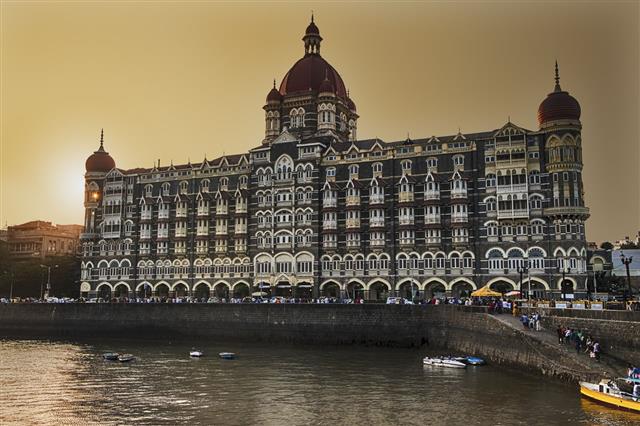 The Taj Mahal Palace & Tower and the Gateway of India

On 26 November 2008, the hotel was attacked by a group of terrorists, along with the nearby Oberoi Trident Hotel. Many people were taken hostage; 31 died at the hotel. Parts of the hotel were heavily destroyed, specially the hotel’s roof and heritage section. Approximately 450 people were staying at the hotel at the time of this incident. It took more than 12 months for all the restoration work to be completed. Sections that weren’t heavily damaged opened on 21 December 2008, while the ones that were, opened on 15 August 2010―the Indian Independence Day. Restoration cost an estimated USD 40 million. Barack Obama was the first foreign head of state to stay at the hotel after the restoration. In a speech from its roof, he said, “The Taj has been the symbol of the strength and the resilience of the Indian people.”

In spite of the terror attacks, this magnificent heritage building stands proudly amidst the debris of the devastation on the shores of the Arabian Sea. It would forever remain as an iconic landmark of India.